Yep, as noted in my last newsletter (email me at bo@harriswagnerlaw.com to join the fun) we have opened a new real estate law closing practice in the middle of the worst housing slump in years. Are we crazy? YEP! But I guess it's a bit of 'put your money where your mouth is' in that I have been a constant cheerleader for this business and I keep pushing people to continue to buy homes. Well, if I can push you (or friends/clients/countrymen) to spend money, we can too (my Amex now screams when I use it)!

Check out our provisional website to see where we will be, etc. I can't believe that we are about a week out from truly opening our doors! We ARE open for business TODAY, however, so if you've finally got that buyer/borrower off the fence, fax us that order right now!
Posted by Bo Wagner at 9:23 AM No comments:

Many of you know that I am a fan of Neal Boortz. Likewise, I know that many people think he's insensitive (yes Virginia, he is, and he's proud of it!). The thing I like about him is that he seems to be pretty balanced. Yes, he's a CONSERVATIVE talk show host (the horror!), but he really blasts the Republicans just as often--and he's on the record that they DESERVED getting voted out of office in the last election (and he's absolutely correct on that). He has written a very well-reasoned "dissertation" for undecided voters. Read it here and give me your thoughts!
Posted by Bo Wagner at 7:12 AM No comments:

The Wheels of Commerce are turning!

I chose the image of a solid office building because it looks "important" and "formidable", like it will be here for a long time. Don't you feel calmed? : ) Now that you are calm, let's have a reality check: The Economy is in the toilet, both in the US and across the globe. Gas prices are down (finally!) but many other household costs are still too high. Housing continues to be a mess and even though rates are STILL wonderful, it's not so simple to get a loan. So what can we do? What should we do? How about guessing what the most counterintuitive thing is to do? Why that's easy! How about opening a new Real Estate Law Firm? Yep, my wife and I are taking the plunge (hopefully not off a cliff) and have teamed up with old friends Jeff Harris and Will Herndon to open the Harris Wagner Law Group, LLC! I have wanted to join forces with Susie (a veteran paralegal/closer) for several years now and somehow all the planets have aligned. (now? yes, now. Um, okay! Let's go for it!). In all honesty, we had expected to do this in the future but forces beyond our control made it necessary to do it NOW. So what's next? Well, we hope to be in an "official" office in mid-November but we are going to be ready to close loans NEXT WEEK! So keep us in mind for your next closing (and keep us in your prayers while you're at it!). The address listed is correct but we aren't in yet (or have phone #'s), so just use the numbers as noted (To email Susie, use estait@earthlink.net). STAY TUNED!


It's been a great year and a half since I started working with the Belle Isle Law Group in Alpharetta and I really appreciate all their support. What a great staff! Likewise, I have been able to use Power Realty's "Imprev" system to send all these emails and it made for a much more professional email newsletter than I had previously. I will be using a new system down the road, so expect a 'new look' going forward.

Speaking of Alpharetta, I wanted to point out that our new office is ITP, more or less where I-85 and 400 meet. We fully expect to be able to handle mobile closings so don't rule us out for closings just because it "appears" that we are non-geographically desirable. We can come to you! 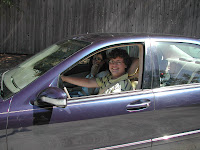 Our son Joey is driving now! As of last Friday, he is a terror on the streets (well, as much of a terror as you can be in a 1991 Mercedes diesel). Yes, he is driving "my baby", but it's the safest car we own and I'm sure he'll do fine. I learned a lot about insurance--while the rates were not horrible for him (since he is a B or above student), the company manages to 'spread the risk' over all our other vehicles so it really made the new premium painful!
Posted by Bo Wagner at 5:48 PM No comments:

I included the quotes around "leaders" as I have little respect for many of our elected officials. You've seen previous rants here or on my BoKnowsEconomics Blog but I'm fed up enough (and have had enough coffee) that I've emailed and want to further rant about it this morning.

SOAPBOX ALERT!
Do you feel powerless? I do! We've put people in power that may or may not care about the true needs of "the people". It's rough to complain, however, because everyone feels that their elected officials are fine. For example, I can't see how people continue to vote for Ted Kennedy! He seems like such an anachronism and so liberal. However, he brings the pork home to his district! If Congress is able to buy votes at home (normally at the expense of the entire US Taxpayer base) then they get to return to DC to wreak havoc again! Do I like my local guy (Tom Price)? Yes I do. I think he's pretty down-to-earth and uses common sense. I have not reviewed his entire voting record, but my gut feel is that he is trying to serve our District. Contrast that with Saxby in the Senate--I feel that the recent Agricultural Bill that passed was a bloated mess and I can't forgive him for that. What to do though? I think Mr. Martin is a nice guy, but I don't feel he's "my" guy (i.e. I think he's too liberal/big government--not that the Republicans haven't screwed up with their largess as well). It's been the same on Presidential elections of late. I still think Kerry and Gore are whack jobs. However, my disappointment in "W" is very deep, but again, what choice did I have? This year? Sheesh... We'll see! Anyway, RANT OVER....

Click on this link to sort out how to email your elected officials!

As noted, I emailed my Congressman, Rep. Tom Price after reading a press release that noted why he did NOT vote for the Bailout Plan. I actually agree with his reasoning! Here is my emailed comment:

"I was pleased to read your Press Release following your NO vote for the misguided Bailout Plan. Please vote NO again on the Senate version as I feel that a) the Plan has not been tweaked enough to be acceptable (e.g. your Press Release points were not addressed) and b) I understand that several 'pet provisions' have been added by the Senate. "We the people" are disgusted by Congress and our government and we have tired of the Partisan bickering. I do feel your comments are spot-on and I hope that some common sense will occur today as it relates to the Senate Bill. Dr. Price, I honestly feel that we are at a crossroads in our country. I can only hope that our government can rediscover what it means to truly serve "in the common good". I wonder how term limits would serve our Country? If Congressional "lifers" were limited to a shorter term/time, perhaps the focus would actually be on our Country versus self-serving actions to secure re-election. I apologize for the rant, but there are many members of Congress that have obviously placed "Self" above Country and it makes me sad. Good luck today and I hope that we can survive this (and other) issue(s) facing America. Thanks, Bo Wagner."

Final shot? Read this quote from Benjamin Franklin: “They who would give up an essential liberty for temporary security, deserve neither liberty or security.”
Posted by Bo Wagner at 9:05 AM No comments:

I LOVE cool mornings like this! I can't wait for the JV Football game tonight! What's on your schedule?

For more ramblings on the Economy, since that's such an important topic these days-check out my other Blog on Economics to see what I think (or links to people who really know what's going on!). Likewise, you definitely need to check out a cool new tool that's on the bottom of my Wine Blog--you can search over 1,000 wines in a tiny space--right on my Blog!

Have fun, be safe and snuggle up! Cheers, Bo

(Oh yeah, don't forget to send me your next refinance or purchase transaction!)
Posted by Bo Wagner at 7:43 AM No comments: