September 27, 2009 may not resonate with anyone else, in contrast to September 11, 2001 or other events that have taken place in the month of September. For me, September has many important dates--our Anniversary is the 23rd (Happy 4th!), my son Joey's birthday is the 29th (still can't believe that he'll be 18 this year!) but the date that has been on my mind all day is 9/27/09.

As the calendar goes, I woke up on that Sunday morning without a care in the world. Susie and I surely sat down with the paper and had coffee as we tend to do; we might have even taken a walk with the puppies. Later on I know that I must have been doing some cleaning as well because I know from the receipt that I went to the Thrift Store to donate some unwanted household items--not that I need the receipt to remind me. Every time I am in that parking lot I think of the call from my sister telling me that my Dad was in the ICU. The first thing you think about when you hear 'he's been intubated' is that it can't be good.

When your sister is a doctor you tend to take on more of a 'wait and see' attitude (e.g. 'do I need to be worried?'). Typically if something was wrong with Dad she was a good filter and broke it down to simple terms. I was worried, but at that point it didn't look bad enough to be told 'head to Kentucky.. NOW. So I went home and even changed the filters in the furnace units, but I couldn't stop thinking that things were going to be worse. I eventually got the call that it was indeed time to head home; packing was a mess as I fell apart. Susie was nervous that I couldn't even drive in that condition. I managed to pull it together but I can't tell you anything about my drive home. It's typically about 5.5 hours; I guess that's how long it took. Regardless, I got there sometime around now (9:30 as I type).

Mom was being supported by 2 couples that have been long-time friends and her minister. We couldn't go back to the ICU as they were trying to do something related to filtering his blood as it was determined that he had sepsis due to an infection. He woke up 'babbling' early Sunday and Mom called an ambulance.

How did we get here? He wasn't feeling well Saturday--when I spoke with him he just sounded tired. It was very random that I even spoke to him--I called Mom at home to ask her a question and we both had to rush to get off the phone--I was at a store and she was on her way out. After I left the store, I called her cell and spoke to Dad--for whatever reason they had traded phones that afternoon--she had his, he had hers. In all honesty I never would have spoken to him if it wasn't for that fact. He had an 'order' of wine (several cases to bring home later that week) and I was happy to tell him I had what he asked me to get.

We got to go into the ICU; despite the tube and breathing apparatus it was still my Dad, wires and all. I spoke to him and touched his hands and rubbed his head. No response, of course, but it felt right. They needed to do something else with him so we were back into the waiting room. After a while (10-ish?) my sister showed up (they were coming from SC). When we got back into the ICU she got to do her doctor thing and got to hear all the options and what had happened so far. Sooner or later the 'daughter' wore off (what else can be done?) and the 'doctor' kicked back in (reality check) and she realized what I already knew in my heart--this was nearing the end.

At that point I will never forget the final events... My sister, brother-in-law and Mom were gathered around his bed. Elizabeth said "Daddy, Mom's here, I'm here, Gary's here and Bo's here. We're going to take great care of Mom". With that, his ridiculously low blood pressure (but steady) began to drop--almost on cue. I remember the numbers dropping so quickly and then it was over... just 4 stunned adults facing their loss and machines continuing to try to breathe for him.

Begrudgingly, we left while they 'cleaned him up' and removed the wires, tubes and artificial 'stuff' that did what they could to keep him alive. Returning, he seemed at peace and as if sleeping. We all said our goodbyes, and kissed him a few last times. It seems so odd to me that I clearly remember how warm his neck was, even though he was gone...

As this was month-end, my small real estate firm was busy with closings and Susie could not leave until the 30th. I think that was the worst--missing my family and feeling alone in my thoughts. It was nice seeing some of the string of family friends and visitors--and I must admit I enjoyed all the food people brought. In fact, it was all like a typical Wagner party--except the jovial host was not there. When Joey, Julia and Susie made it I was so relieved and promptly fell apart again--though they gave me much strength. I needed it in order to eulogize my Dad. I don't know how Elizabeth and I did it, but oddly enough I always knew that someday my Dad would pass and someday I would say something along the lines of "Dad always said 'Bo's never had a bad day in his life'; well today, this is a bad day, Dad." Today I must smile, remember my Dad and raise a glass to Frank W. Wagner, Jr. May God rest your soul. I miss you Dad... I love you...

To my family and friends, God bless you and thank you for your support at that time and now as we remember him, a year ago today. 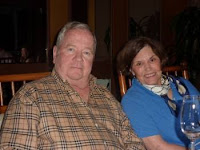