Mind your own business Pete Borden, take 2! (The Recap!) 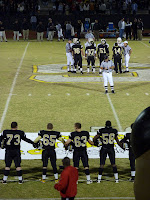 This is my prior post on Walter G. "Pete" Borden and I have to say that I am still just as annoyed about the entire situation. To give an update, Mr. Borden was DENIED but it wasn't soon enough to allow my son's high school to have the turf installed. The football year-end banquet was last Monday and the Coach noted that the new turf field is in the process of being installed (brrr!). I am curious how much his silly argument cost our county to defend? All I know that my son (a/k/a "the retired football player") never got the chance to play on that 'field of dreams'. In all honesty, no, I don't think his season was any better or worse due to that delay, but I would have liked to see him play on the new field. Maybe we'll go see a game or two at Sprayberry High next year, but it obviously won't be the same without Joey. So shame on you Pete Borden, for actually wasting our taxpayer money by filing a lawsuit and causing delays in a process that I SPECIFICALLY VOTED FOR.
Posted by Bo Wagner at 2:10 PM No comments: